Corfu in the past 2: "O Markás", the old market building

In the area of the old port, existed the old market building which was bombarded by the Germans in 1943. It was a beautiful building which was one of the liveliest points in Corfu where the locals bought meat and vegetables chatting and socializing. After its demolition, being almost ruined by the bombs, the present Spilia square was built and the whole area lost its vitality and importance.
The postcard below was taken in the early 20th century and shows the busy market building known as "Markás" (a colloquial name probably originated from the venetian word for market "marcà"). Αt the background a portion of the New Fortress could be seen. At the foreground at the far right a young boy is resting under a tree and at the left a company is probably chatting talking loudly in the local dialect. Behind them, some market people or farmers carry the produce and a man in uniform, probably a policeman is looking at them. 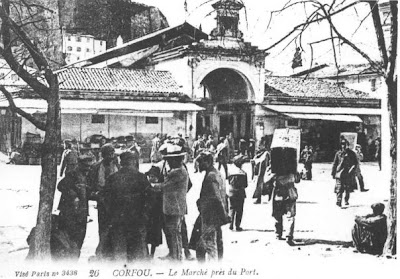 The oldest corfiots still remember the building and lament it, much like the old municipal theatre. But we should feel happy that there are some documentary photos like this which make us remember how those fine defunct buildings looked like.
Email ThisBlogThis!Share to TwitterShare to FacebookShare to Pinterest
at 14:06 0 comments

The "Save Annunziata" initiative

It seems that there is a great interest for that old venetian monument towering above one of the central points of Corfu Town. A Facebook group was created in order to promote the Annunziata's history and importance as well as persuade people to support this cause. So last Thursday, a peaceful protest was organized and around 250 people showed up standing for a good two hours holding a lit candle. It is worth noticing that the Annunziata's bell sounded for the first time after many years marking a new era for its fate.
There was also a book in which the supporters signed the petition. Among the supporters of the movement who signed a petition was Sotiris Mikalef, the ex-mayor of Corfu Town, who promised to make everything within his power to restore and protect the monument.
I hope this will be a good start and make local people think of Annunziata's historic importance. I have already posted a brief history in this blog, if you are interested have a look. Below there are a bunch of photos from the protest and a short video. 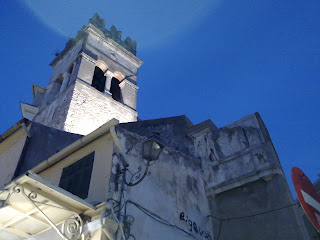 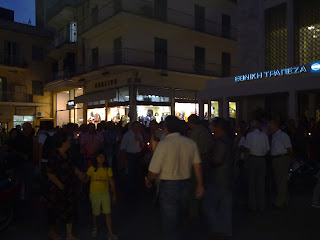 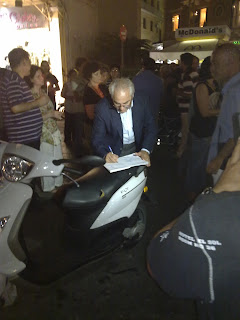 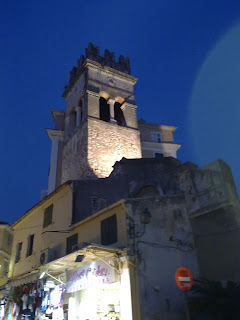 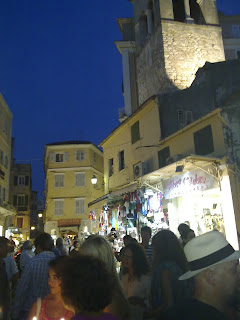 Email ThisBlogThis!Share to TwitterShare to FacebookShare to Pinterest
at 14:50 0 comments

On the boat to Vidos island...

Here is a recent video of my visit to Vidos island (soon I'll post a photo-tour of Vidos). The old port can be seen with the infamous marina under construction, the Mouragia area and a cruise ship entering Corfu's harbour in the distance. The trip is short and pleasant, it takes no more than 10 minutes. There is an hourly service to and from Vidos, costing you only 2 euros.

Email ThisBlogThis!Share to TwitterShare to FacebookShare to Pinterest
at 15:10 0 comments

The "Panagitsa" chapel inside a vault of Mouragia's ancient wall

In the Mouragia, an area which took its name from the italian word for wall "muraglia", a miniature church could be found inside a vaulted chamber. It is called "Panagitsa" ("Little Virgin Mary"). 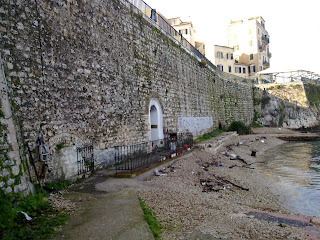 Nobody can tell for sure when and why this little chapel was built. Legend has it that some centuries ago, a seaman was seeing a light coming out of a little cave. Some years after, a mural which depicted the Virgin Mary was discovered and since then this place became a place of worship. 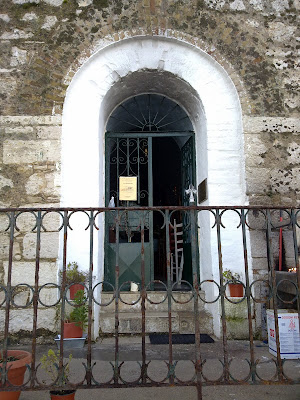 Today, the place is being visited by the locals and the tourists who want to pray. A bunch of local folk take care and maintain the chapel with love and devotion. 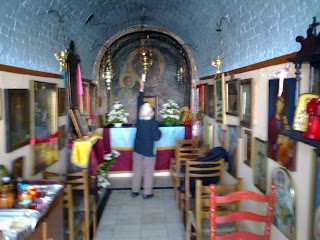 To access the chapel, pass the gate of Saint George in the Anaktora area towards Mouragia and then turn right down Faliraki. When you arrive down at Faliraki, on your left hand you will find a parking area. The chapel is located at the very end of it, facing a little beach under the walls frequented by some elderly locals. 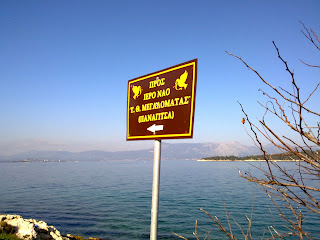 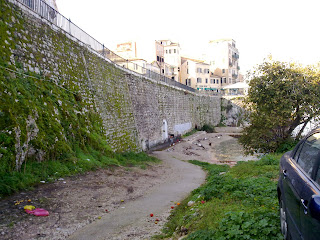 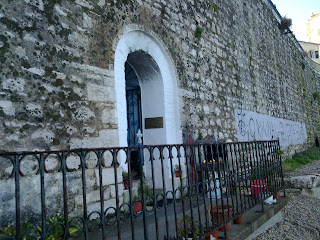 Email ThisBlogThis!Share to TwitterShare to FacebookShare to Pinterest
at 21:25 0 comments

A 37-years old photo taken from a building in Sarocco square looking towards Alexandras avenue. In this wintry show, we can see the centre of the town with fewer cars and narrower pavements/traffic islands. An old Sarakakis blue bus can be seen at the right bottom. At the left side, some cars are parked in what is now a pavement - in those days there had been a fuel station where now is "27" cafe (I still remember it still being there in the late 80s). The zebra crossings were clearly marked and some traffic lights had been adjusting the virtually non-existent traffic. 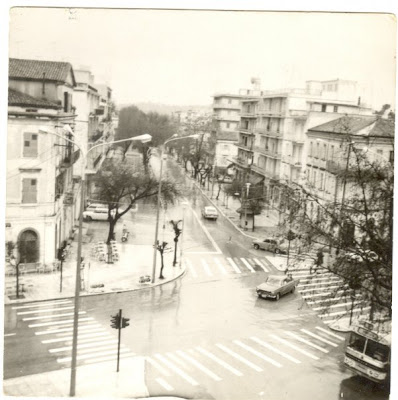 *This photo was taken from the very interesting "Corfu old Photos" group in Facebook.
Email ThisBlogThis!Share to TwitterShare to FacebookShare to Pinterest
at 16:09 0 comments

"Lykoudis" bookshop closes its doors after 63 years of existence

One of the oldest and well-known local bookshop closes its doors after selling books and stationery since 1947. "Lykoudis" is to be found in Georgaki square but the original bookshop was across the Annunziata monument in the present "Glou" shop. During last week's "everything must go" promotion (selling all stock at 60% off) the majority of books have now gone and few could still found on the shelves. 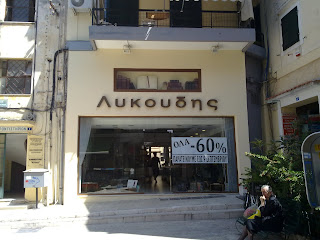 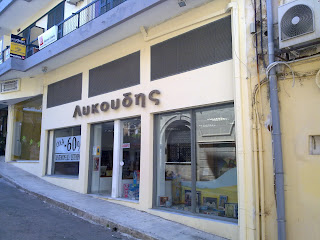 I bought a novel which costed me only three euros. When I payed it, I asked the owner about the forthcoming close and she told me that she is getting her retirement. But there might be another reason as well, due to the greek crisis and the other alternative pastimes, fewer and fewer people spend money to buy books and they prefer to spend their free time on tv and surfing the internet. 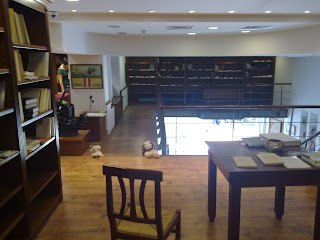 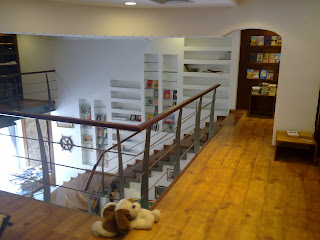 The furniture should go as well, most of them have already been sold! When I've visited, there were lots off people gazing and searching through the almost empty shelves. 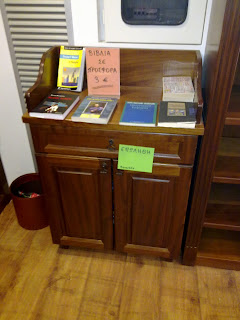 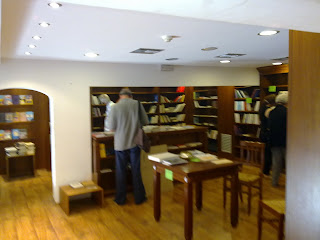 I hope this will be the last loss and new bookshops will open to satisfy the local people's love for literature and knowledge.
Email ThisBlogThis!Share to TwitterShare to FacebookShare to Pinterest
at 15:36 0 comments

The Medical and Surgical Society of Corfu was founded in 1897 by the corfiot doctors Ilias Politis, Eugenios Pogiagos and Petros Zotos. They were the then new generation of doctor scientists who had run the "Collegio   medico Corfu", funded by Ioannis Kapodistrias and later the Ionian Academy's Faculty of Medicine in 1824. The Society, together with the athenian one are the oldest in Greece and its scope was "the promotion of the science of medicine in Corfu, the study of the local illnesses, the clarification of their causes and their prevention". 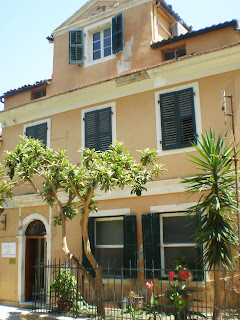 Two years later, in 1899, the Society funded a first aid station, called "Iatrion Kerkyras". During the greek-turkish war of 1897, its doctors took care of the wounded soldiers. London's "Daily Chronicle" donated money to equip the building. Until our days The "Iatrion" mostly deals with emergencies and its services are free of charge. More than 15,000 patients are being treated annualy by the Society. 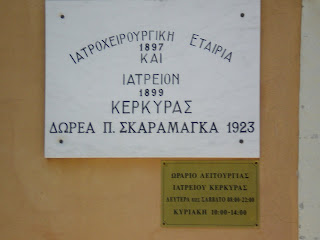 Its buiding was donated by Polimnia Skaramanga and it is located in Skaramanga street in the centre of the town, close to the "Annunziata" monument. 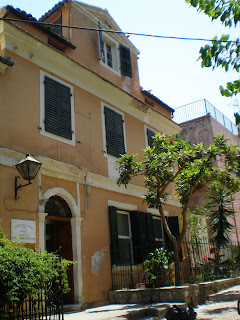 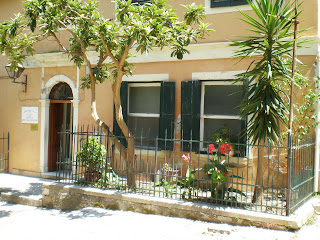 Email ThisBlogThis!Share to TwitterShare to FacebookShare to Pinterest
at 18:33 0 comments

The August's full moon was celebrated by poets, writers, musicians, painters and lovers. It is the most beautiful and romantic full moon of the year. This year's full moon was special. The skies were clear that night and it was warm and serene. Many took photos and videos of the full moon but the video I posted below is more than special. Probably one of the most beautiful moon videos I've ever seen. In the video, the full moon is rising right over the old lighthouse on the top of the Old Fortress. It's not really a video but a sequence of individual photos being put together. You can also notice how the moon colour is changing, from orange to yellow.