Hailing from California, John Graham (also known as "Quivver") is a legend among those who really love what is called Progressive house music. 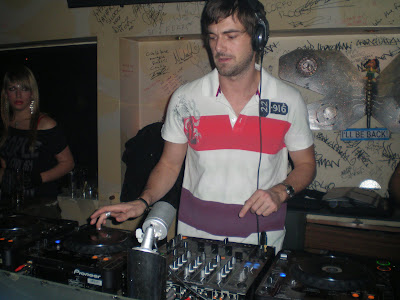 Maybe that was why the club was far from being full yesterday, the event attracted mostly progressive house music lovers. That's a pity because I think Graham deserved a bigger audience. Moreover, a more extensive promotion of the event should have been done.

If you were among those who didn't know about the event, don't worry! The good news is that a mega star dj, Jerome Isma-ae is going to rock the decks of Au Bar with the dawn of new year!! 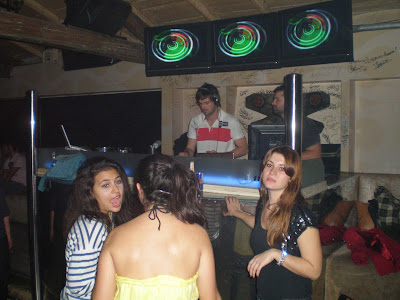 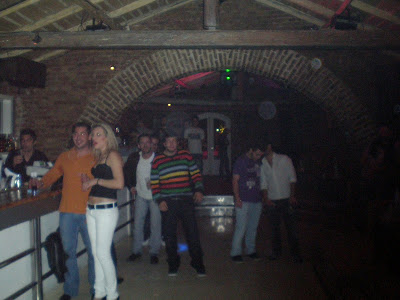 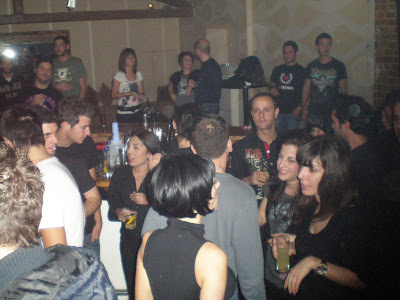 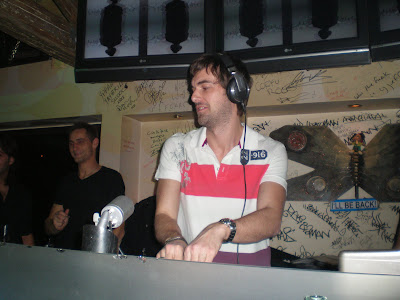 Email ThisBlogThis!Share to TwitterShare to FacebookShare to Pinterest
at 13:50 0 comments

Corfu from the top of the Old Fortress 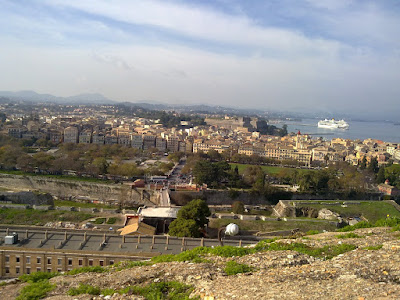 Taken in 24/11/2009 with my Nokia N79 5mp camera.
Email ThisBlogThis!Share to TwitterShare to FacebookShare to Pinterest
at 18:34 0 comments

Corfu mourns the loss of a great musician 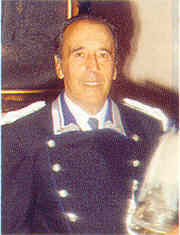 Last Saturday ,at the age of 80 years, died the distinguished corfiot musician and conductor, for many years, of "Mantzaros", Stefanos Dolianitis.
He was born in Corfu in 1929. He was the conductor of the band (husband of Nena Dolianitis and father of Lina and Spyros Dolianitis). He was an offspring of the Philharmonic Society Mantzaros, in which joined in 1946 (his first teacher was Christos Dapergolas).
There he trained in theoretical and practical music (clarinetto and saxofono). He continued his studies at the Athens Conservatory, at the class of the great Corfiot teacher Spyros Lazaros. In 1951, he returned to Corfu and continued his studies with Theodoros Kavadias and Alexandros Grek (theory and piano). In 1958 he attended the National Conservatory, graduating in 1960 with a degree in direction and band instrumentation (he was a student of M. Kalomiris). Since then he `d been conductor and Director of Schools of Philarminic Band " Mantzaros "in which previously had been a vice conductor.
At the same time he composed music for the play of Theodoros Zamanis "` One Corfiot hustler" and wrote the music of well-known songs as "Na ksanartheis" ," Korfiatopoula, etc. He remained the director of "Mantzaros" for over 35 years and directed the entire "classic" repertoire for band, having himself transcribed numerous tracks from the international and lyrical symphonic repertoire, but also from that of the quality "light music". Also he composed marches and marchias.
In 1974, in Corfu, he created the first "student band" (mpantina) and in 1986 he conducted the Philharmonic in Pleven, Bulgaria, with the distinguished soloist of trumpet, Socrates Anthis.
Stefanos Dolianitis was also commendable because, despite the tempting artistic proposals that occasionally received from various music organizations outside Corfu, he did not give in and remained in his home as a conscious and inspired servant of the unique music tradition of the island of culture, Corfu.
The funeral will be held today at 3 pm at the first cemetery in Garitsa. May he rest in peace!
Email ThisBlogThis!Share to TwitterShare to FacebookShare to Pinterest
at 12:54 0 comments

My blog was created at November 5th of 2007 and my intention was to find a place to post my ideas, photographs, experiences and tours of Corfu. I hope you still enjoy this page and I promise that I will try to make this blog even more interesting and appreciable by all Corfu fans around the world. 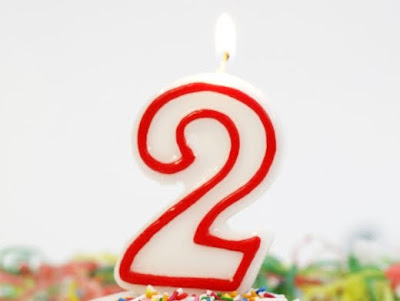 Email ThisBlogThis!Share to TwitterShare to FacebookShare to Pinterest
at 13:57 0 comments

A video dedicated to the Old Municipal theatre of Corfu

I just found that amazing video displaying images of the now gone Old Municipal theatre, which stood at the same site where the monstrous New Mucipal Theatre built in late 1970s. The background music is taken from "Lohengrin" of R. Wagner, which was the first opera performed at the theatre.

"The decision to create a new Municipal Theater, was taken in 1885, Mayor George Theotokis. Construction began in 1893, Mayor Michael Theotokis. Given the high cost of the project was completed in 1902 to plans by the Italian architect Conrado Pergolesi, who used the building as a model of "La Scala". The theater had a height of 39 meters and was the entrance portico, which adorned the facade of columns 6 Tuscan style. Externally, the upper floor 4 columns adorned with Corinthian capitals and pediment. In the middle of the pediment was relief escutcheon of Corfu, surrounded by laurel wreath, and films. The entrance to the theater was decorated with huge purple columns and around the high walls were decorated with portraits of great musicians, who had painted fine Italian painters.
The Public Theater had 64 galleries in three rows and a loft. Each gallery was luxurious, private living room had a bathroom, small room with mirrors and precious curtain and exclusively own illumination gas. The theater was luxurious square, richly decorated with deep purple plush armchairs, which at the end of the square was smaller.
The Municipal Theater of Corfu, considered one of the best in Europe. The acoustics were incomparable by any technical terms and was able to correctly render the slightest nuance of sound. The estimated capacity of about a thousand seats, and had a large foyer, the ceilings decorated with beautiful wall-paintings of Italian painters depicting Greek ancient gods and various musical representations. Famous have remained the dances given in the foyer.
The opening performances of the Municipal Theater of Corfu were held on December 7, 1902 in "Lohengrin" of Wagner. In one of its performances attended by Kaiser Wilhelm II of Germany at the time of visiting the "Achillion '.
The Public Theater gold cost one million pounds, an enormous amount of time, forcing the municipality to enter into Corfu sinking loan, the final repayment of which would be in 1941. Unfortunately, the Municipal Theater was lost in the night of 13 to 14 September 1943, arson of the dreadful night of Corfu town from the Germans.
The only thing that survived was the curtain, which by chance was not at the Public Theater that night.
Unfortunately the post-war period the building was damaged by the Corfiot architect John Kollas and civil engineers George Linardos and Renos Paipetis, that there is no architectural and historical value. The opinion was announced to the City Council of Corfu, with Mayor then Stamatis Desyllas, which is meeting on March 31, 1952, unanimously decided to demolish the Municipal Theater. The theater was demolished, despite the strong protests of many of Corfu, who arrived at the courtroom. Several years later built in place of another, but the old theater is never faded from the heart of Corfiots. This is evidenced by the dozens of photos, which are hung everywhere from private offices to public buildings, longing for his lost glory."
Corfiots will never forget that fine piece of architecture which embellished their island...
Email ThisBlogThis!Share to TwitterShare to FacebookShare to Pinterest
at 19:23 1 comments

The proof that derelict factories in the Mandouki area house poor immigrants from distant asian countries such as Afganistan, Pakistan and Kurdistan. 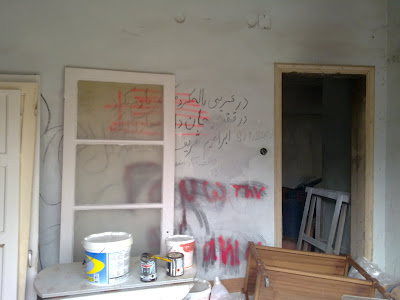 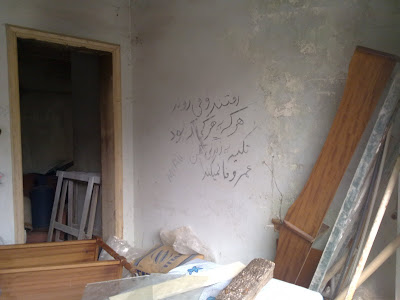 Does anyone of you can translate those for us? It would be interesting to inform me in what language is this graffiti written and what does it say. So any friends of this blog who can read those, please drop me a line.
Email ThisBlogThis!Share to TwitterShare to FacebookShare to Pinterest
at 13:38 0 comments