This is a summer dance song composed by two good friends of mine. The video was filmed in Chania, Creta. Please share the video with your friends.
The video's URL: http://youtu.be/CgF_ZKRAzi4

Email ThisBlogThis!Share to TwitterShare to FacebookShare to Pinterest
at 21:39 0 comments

This mansion facing the Esplanade was where corfiot painter Aggelos Giallinas (1857-1939) once lived. Its arquitectural style is similar to that of the Ricci mansion in Plati Kantouni as its dominant feature is the venetian arched portico and the balcony above it too. 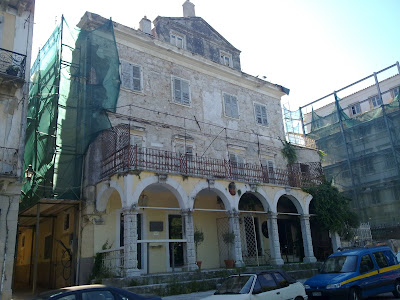 There is a commemorative plaque on its façade stating the fact that one of the most famous corfiot artists lived a great part of his life in this building. 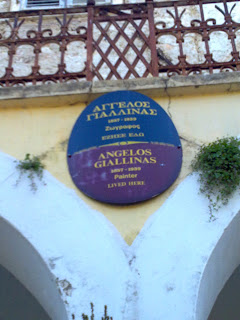 Below there are some photos of the mansion that I took this evening, The mansion hopefully is under renovation after 2010 theft where many paintings of the famous artists had been stolen. 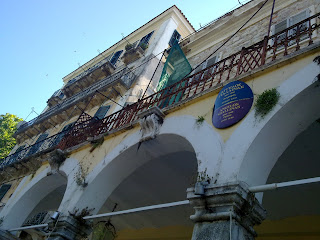 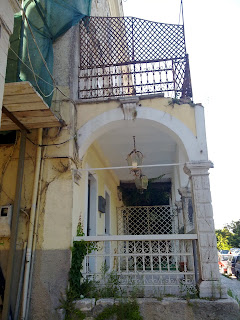 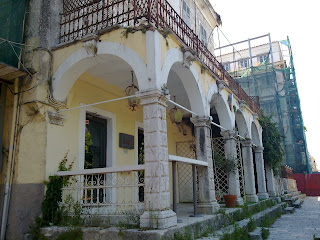 This is the main entrance which leads to the second and third floor (the lower floor houses a billiard club and a bar). It can be found on the right hand side of the building. But this side is looking really run-down. Let's hope the renovation will finish soon and the building become a museum in which the work of this important artist will be exposed. 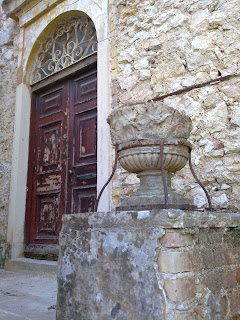 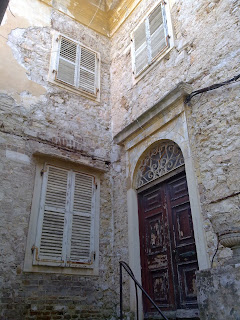 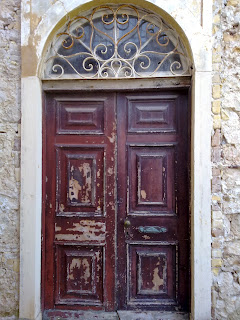 Email ThisBlogThis!Share to TwitterShare to FacebookShare to Pinterest
at 18:17 0 comments

The origin of the word "Esplanade" 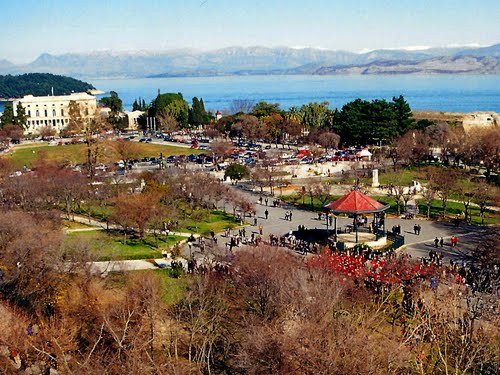 Did you know that the word "Esplanade" shares the common latin root with the verb "to explain"?

In the latin language exists the verb "explanare" (ex+planus) which has two definitions:
a) to flatten and b) to make smth clear, to explain.

The verb was adopted by the modern latin languages, as well as by English. So in Spanish exists the verb "explanar" and in Italian the verb "spianare".
From the Perfect Passive Participle of the latin verb "explanar" ("explanata"= flattened) derives the italian word "Spianata", the spanish "Explanada" and the english "Esplanade" which is used to describe a flattened terrain without trees or a square.

Email ThisBlogThis!Share to TwitterShare to FacebookShare to Pinterest
at 13:21 0 comments

One of the most beautiful statues in Greece can be found on the southern end of Spianada ("Esplanade") just across the road from the Ionian Academy building.
Kapodistrias was the first governor of Greece. He was born in Corfu from a noble family which its roots can be traced  in the old venetian town of Capo d'Istria (today known as Koper in Slovenia). He served as minister of foreign affairs of the Russian Empire but he returned to his homeland in 1828 to become the first governor of independent Greece. His tenure was very sucessful but he was hated by some rich greek families. When in 1831 Kapodistrias ordered the imprisonment of Petrobey Mavromichalis, a well known rebelion from Mani, his family took it as an offence and on October 9th, 1831 Petrobey's brother Konstantis and his son Georgios assessinate him in Nafplion, the first greek capital.
Today Kapodistrias is greatly honoured in Greece. The statue was sculpted by Leonidas Drosis and his student Georgios Xenakis using the famous marble of mount Pentelikon in Attica. It was placed in 1887 on the site where originally stood the Douglas obelisk. 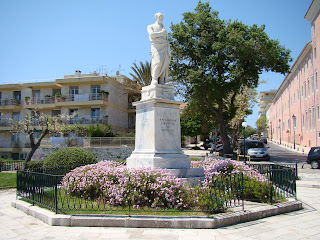 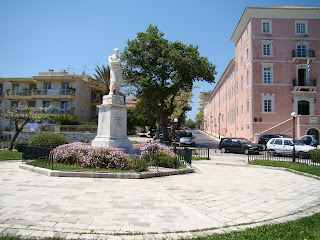 The  view from the Kapodistrias statue. 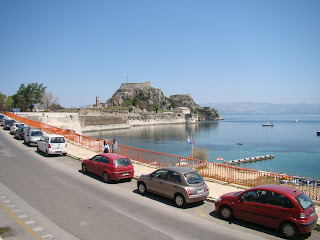 Email ThisBlogThis!Share to TwitterShare to FacebookShare to Pinterest
at 13:43 1 comments

How it looked like the medieval town of Corfu?

Little is known about how the medieval town of Corfu looked liked before the completition of the complex 16th century venetian fortifications. There are few sources such as the map schetched by Konrad von Grünenberg in 1487, few decades before the completion of the Contrafossa canal which seperates the Old Fortress peninsula with the rest of Corfu Town.
In the map it is easily noticed that Contrafossa hadn't yet been constructed and most of town's residents lived inside the walled Old Fortress peninsula. Outside that walled area, there was Borgo, the then unwalled suburb. Few decades later Borgo became the central part of the town as many people had been forced to leave the fortress which became the administrative and military centre of the island. The port of the medieval town was at Mandraki, which today is a small marina. There was a wooden bridge which provided access to the breakewater on which the ships moored.
The two hill tops from which Corfu took its name (Kορυφώ= mountain/hill top) dominated the town below them. It seems that there were two castles on the top of each hill. There was a church between the hills too.
The Grünenberg map is rich in detail and probably is more realistic that somebody might think.

Email ThisBlogThis!Share to TwitterShare to FacebookShare to Pinterest
at 10:39 2 comments